Date of the ceremony of awarding the doctorate honoris causa: May 23, 2006.

Professor Witold Kieżun is a theoretician of praxeological theory of organization and management. He was the Head of the Department of Praxeology of the Polish Academy of Sciences and the Department of Organization Theory of the Faculty of Management at the University of Warsaw. He has been associated with Kozminski University since the beginning of its existence, since 1993.

Professor Kieżun was a soldier of the Home Army, during the Warsaw Uprising he was decorated with the military order Virtuti Militari. After the war, he was imprisoned in the Soviet death camp in the Kara Kum Desert.

In the years 1980-1998 he lectured at American and Canadian universities, he was the head of the UN administrative reform projects.

He is the author of over 70 books, scripts and about 300 articles and papers in Polish, English, French, Spanish and Czech. He belongs to many scientific organizations, including the International Academy of Management, he is a member of the Council of the Foundation Ius et Lex. 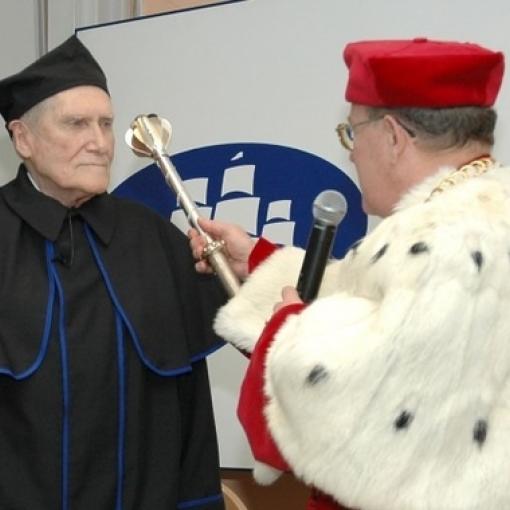 Date of the ceremony of awarding the doctorate honoris causa: July 14, 2012.

He conducts research projects in Poland, his books and articles are published here. He also makes guest lectures at KU and participates in the work of KU's International Business Consultancy Council.

In German-speaking countries, Professor Simon is ranked the most influential management thinker after the late Peter Drucker, according to the ongoing internet survey Managementdenker.com. Hermann Simon, born in 1947 in the Eifel region in western Germany, graduated from Officer’s School in Munich and served in fighter squadron of German Air Force from 1967 to 1969. From 1969 he studied business and economics at the Universities of Cologne and Bonn, and graduated in 1973 from the University of Bonn. His Ph.D. dissertation on “Pricing Strategies for New Products” and habilitation thesis on “Dynamic Product Line Marketing” were written at the University of Bonn.

Between 1989 and 1995 he was a professor at Johannes-Gutenberg-University in Mainz. During his academic years Hermann Simon spent several years at universities abroad: he was a post-doctorate fellow at Massachusetts Institute of Technology, taught MBA and executive courses at INSEAD, was a visiting professor at Keyo University Tokyo and at Stanford University. He spent one year at Harvard Business School and taught part-time at London Business School for years.

His research topics concentrate on pricing, with emphasis on dynamic models and interactions with other marketing variables. His works on price management become standard textbooks not only in German-speaking countries, and have been translated to 15 languages.

Other area of Hermann Simon’s research is related to so called “hidden champions”, companies that excel in their niche markets and kept their leadership positions in the long run. Professor Simon has coined the term and become internationally recognized, as the subject of “hidden champions” made the covers of “BusinessWeek” and other popular magazines. He was the first German scholar to publish extensively in top-rated American management journals. 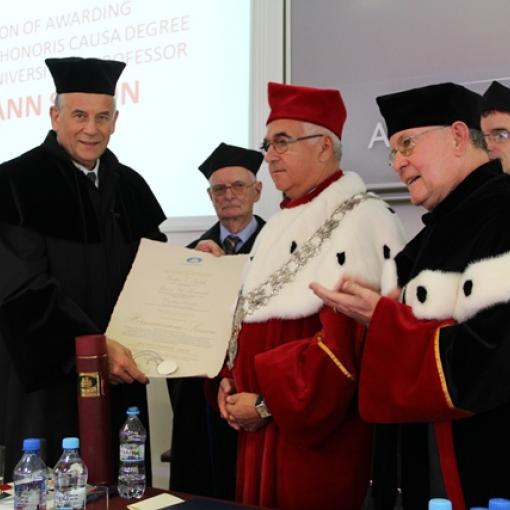 Date of the ceremony of awarding the doctorate honoris causa: October 4, 2013.

Ingvar Kamprad is the creator of IKEA.

For the first time in the history of the university, an honorary doctorate was given to a person who is not an academician. However, the practical solutions created by Ingvar Kamprad have become the subject of many scientific papers and have made a huge contribution to modern marketing and business strategies.

In the case of IKEA, the list of innovative solutions is extremely long. These include: care for the natural environment and sustainable development, extensive networks of cooperative relations, equal opportunities for furniture manufacturers, including those from Poland, and a universal sales model that works well on every continent.

Thanking the University for awarding the title of doctor honoris causa, Ingvar Kamprad said that in every country where IKEA started its operation, he was guided by the message that both the company and the country would benefit from its existance. 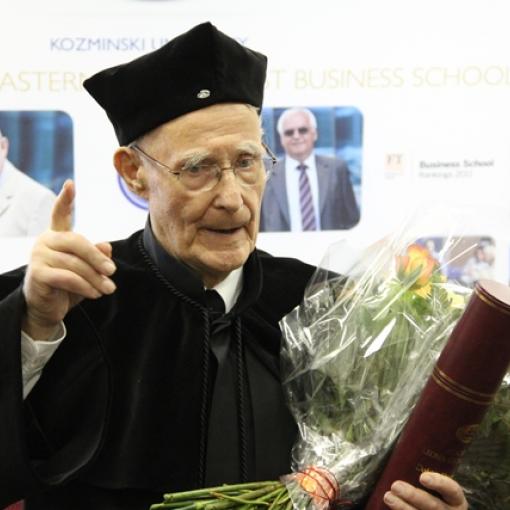 Date of the ceremony of awarding the doctorate honoris causa: December 17, 2015.

Professor Jerzy Dietl is an outstanding scientist, a great social worker, an uncompromising advocate of the free market. He worked at the University of Economics in Poznań, at the University of Lodz and at the  National Louis University in Nowy Sącz. For many years he has been a member of the Board of Trustees of Kozminski University, and the university authorities highly value his opinions, comments and conclusions about the management and development of scientific and research activities.

During the war, Jerzy Dietl fought in the Home Army. In the 1980s he was an expert advisor for the Solidarity movement. During martial law he was forbidden to work with students, but he was still involved in opposition activities. He co-organized the Church Foundation aimed at supporting the development of the Polish countryside. In the years 1989-1991 he was a senator.

In 1990, he established the Entrepreneurship Development Foundation, which operates to this day in Łódź and deals with scholarship assistance for academic youth. 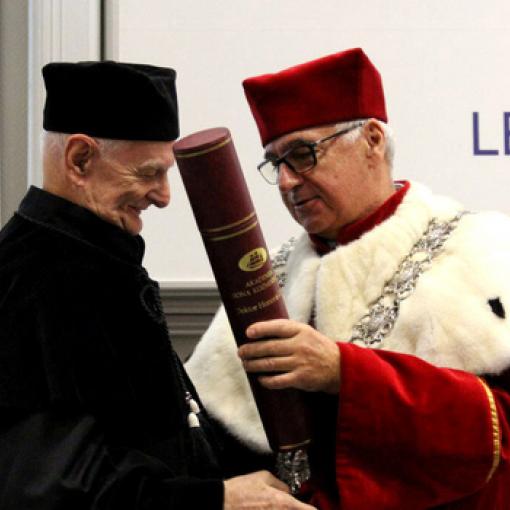 Date of the ceremony of awarding the doctorate honoris causa: October 8, 2018.

Professor Edward C. Prescott is a great figure in modern economics, winner of the Bank of Sweden's Nobel Prize in Economics in 2004 for his contribution to the study of real business cycles.Professor Edward C. Prescott has been associated with Carnegie Mellon University for many years, and later with the University of Minnesota, he was a visiting professor at Northwestern University and the University of Chicago. He is currently a professor of economics at the University of Arizona and an adviser at the Federal Reserve Bank of Minneapolis. The title of honorary doctor has already been awarded to universities from Italy, Israel, China and Greece. It represents the analytical-mathematical branch of economic sciences rooted in traditional macroeconomics, but its publications also deal with demographic problems, economic growth and the value of money. Since 2009, Edward C. Prescott is a member of the International Business Consultancy Council at KU.The official awarding of the title of doctor honoris causa to Professor Prescott took place during the jubilee inauguration of the academic year 2018/2019 on the 25th anniversary of the founding of KU.

Photo gallary from the ceremony 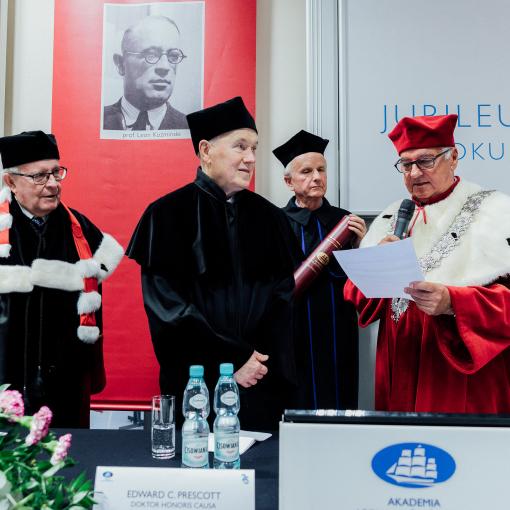